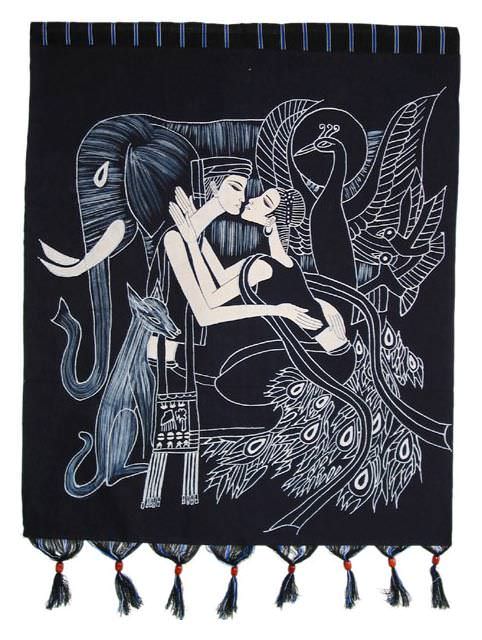 • Delivered to you in Ashburn by Dec 7th.
• Standard shipping is just $3.80 for any order.
• Last one like this. Unable to get more.
• Money-Back Guarantee.

This handmade batik features a fun couple. They kiss surrounded by many animals including and elephant, a peacock, and some kind of dog-like creature.

The couple in this batik are from one of China's 55 minority ethnicities, dressed in traditional clothing of her tribe.

Made by highly skilled work with the "wax knife" then colored with natural indigo blue dye. It is ready to hang with the hand-loomed cloth backing and fringe that has been sewn on. There is a sleeve at the top where you can put a stick or small bamboo shaft (not included).

The story of how I came to find this batik art:

I find myself in the Province of Guizhou returning from exploring some small ethnic minority villages in the mountains near Kaili, my search for batik art continues. The village women could make the most wonderful ethnic clothing, but I can not find a creator of batiks. I find a bus to Kaili full of villagers, chickens, cargo, with other livestock in cages on the roof of the bus. I arrive in Kaili and find a bus to Guiyang realizing that is has been weeks of travel since I last bought a piece of art. From Guiyang I head to Anshun which is known for batik art. After 8 hours of buses and waiting for buses, I am strangely relieved to put on my heavy backpack again.

One of the ladies that creates these wonderful batiks.

I spend the next day walking and hitching rides around the city, but while I find batiks in lots of little markets, I can't find the source... ...I want to know who makes these, I want to meet them and talk to them. The locals tell me that the batiks are made in the villages outside of town, but they won't say or don't know exactly where. I tell a man I am trying to find batik makers and he yells at the driver of a departing mini-bus to stop and tells me to get on the bus. The door of the bus closes before I can ask him where I am actually going.

The bus zips along a rough road for about two hours when it finally stops and everyone gets off. This was probably a minority village at some time in history, but now it is a small bustling town. I ask about batiks to some of the people on the street who seem to know very little about the bounty of which I seek. Suddenly a 3-wheel motorcycle taxi driver tugs on my arm after overhearing my conversation. "You need to go to Stone Village, I can take you", he says in a local dialect which seems to be related to Mandarin so I can understand him (just barely).

We drive that noisy motor-taxi for over an hour through some of the roughest dirt roads that I have ever seen in China. I thought we were going to tip over many times, but somehow we arrive at Stone Village. They rarely see foreigners in this remote village, and a flood of children come out to greet me each one shouting one of the only English words they know which is "Hello!".

The best way to get around Southern China

I am quickly invited into several homes which double as workshops for the various handcrafts. After taking a good look at what is available, I stumble into a stone house to be greeted by a few ladies who seem to run the place. It is all here, from the hand loom to make the cloth, to the big pot of blue dye. I looked on the wall where they hang their prizes.

My eyes feast on the beautiful work. Some of the pieces are suitable for framing, others are tablecloth batiks, wall-hangings, and even batik dresses. This is what I've spent the last two weeks looking for. I finally found it! I'm so happy to see these colorful creations that I simply ask, "Would it be alright if I buy everything?". They gasp and gladly say yes. I load up all of the batik cloths into the moto-taxi after buying everything except the dresses. I return to Anshun after nightfall and prepare for my departure the next morning to Kunming and then on to Tibet in search of other treasures...

Batik is a traditional Chinese folk art which combines painting and dyeing.   It is created by dipping a special knife into melted wax and painting that wax on pieces of white cloth. The wax stays embedded in the cloth and often cracks after it cools. The cloth is then dyed and the dyes seep into the cracks and make fine lines. When the wax is boiled away, beautiful patterns appear on the cloth.

The history of batik can be traced back to the Western Han Dynasty (206 BC - 24 AD).   It has been handed down from generation to generation among the ethnic people in Guizhou, a province in Southwest China.

Nobody knows how batik was invented, but a folk tale about a "batik girl" tells us something about it. The story goes that long ago, there was a girl living in a village called Anshun, in what is now Guizhou Province. She was fond of dyeing white cloth blue and purple. One day, while she was working, a bee happened to alight on her cloth and left a little wax.  After dying the cloth she found there was a white dot left which looked very pretty. Her finding led to the use of wax in dyeing and the birth of batik art

Hanging Out in the Nude
Oriental Modern Art Painting

Hanging Out in the Nude with Flowers
Modern Art Painting

Hanging Out in the Nude
Modern Art Asian Painting

Hanging Out in the Nude with Flowers
Chinese Modern Art Painting

Hanging Out in the Nude
Modern Art Painting

Hanging Out in the Nude with Cat
Modern Art Chinese Painting