You need an Aikido Wall Scroll?
We'll build a quality custom Aikido Kanji wall scroll for you at a discount price! 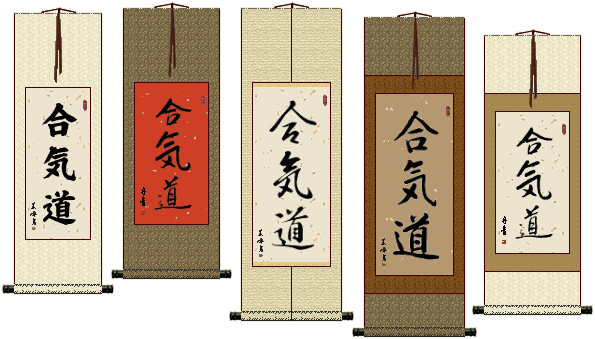 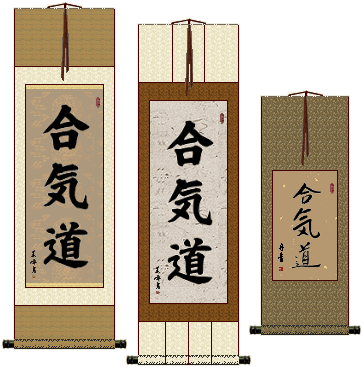 We have many options to create artwork with Aikido Kanji on a wall scroll or portrait.

合気道 is the modern Japanese way to write Aikido.

Aikido is often referred to as the defensive martial art.

While Aikido was born in Japan, it has become a somewhat famous form of defensive tactics taught to soldiers and Marines, as well as some law enforcement officers in the West.

Looking at the characters, the first means “union” or “harmony.”
The second character means “universal energy” or “spirit.”
The third means “way” or “method.”

Please note that while the original 合氣道 characters can be pronounced in Chinese, this word is not well-known in China and is not considered part of the Chinese lexicon.

Note: It is somewhat accepted that this is the origin of Hapkido in Korea. And other than a modern simplification to the middle Kanji of this 3-Kanji word, it is written the same in Korean Hanja.

合気会 or “Aikikai” is the original school of Aikido.

Several organizations use this title. The first was established in Japan in 1940 (The Aikikai Foundation or 財団法人合気会).

The only difference between this title and Aikido is the last character, “kai” which means club, group, fraternity, organization, or assembly.

Note: This title may be romanized with a dash like this: Aiki-Kai.

Hapkido or 合氣道 is a mostly-defensive martial art in Korea.

Hapkido has some connection to the Aikido of Japan. They are written with the same characters in both languages. However, it should be noted that the Korean Hanja characters shown here are the traditional Chinese form - but in modern Japan, the middle character was slightly simplified.
Note: You can consider this to be the older Japanese written form of Aikido. Titles on older books and signs about Aikido use this form.

The connection between Japanese Aikido and Korean Hapkido is muddled in history. The issue is probably due to the difficult relationship between the two countries around WWII. Many Koreans became virtual slaves to the Japanese during that period. After WWII, many things in Korea were disassociated from having any Japanese origin. The relationship has greatly mellowed out now.

Looking at the characters, the first means “union” or “harmony.”
The second character means “universal energy” or “spirit.”
The third means “way” or “method.”
One way to translate this into English is the “Harmonizing Energy Method.” This makes sense, as Hapkido has more to do with redirecting energy than fighting strength against strength.

3. While these Korean Hanja characters can be pronounced in Chinese, this word is not well-known in China and is not considered part of the Chinese lexicon.

Be sure this is the right Kodokan for your school, as there are two different titles that romanize as Kodokan in Japanese.

狼合氣道 is the title for Okami Hapkido or Wolf Hapkido.

松涛館合気道 is the title for Shotokan Aikido in Japanese.

Note: Chinese and Korean pronunciations of these characters are included above, however, this title would only be understood in Chinese or Korean by someone who practices or is familiar with Shotokan Aikido. Please consider this title to be “Japanese only.”