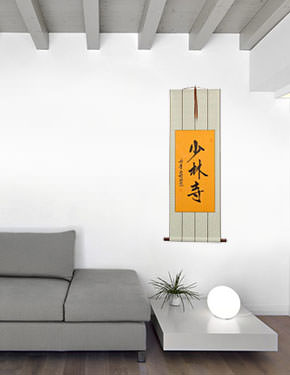 少林寺 is the full title of the Shaolin Temple.

This refers to the Buddhist monastery famous for its kung fu monks.

少林寺 is also known in Japanese where they use the same characters but romanize it as Shourinji or Shōrinji.

Some believe this monastery and temple represent the place where Bodhidharma sat with his face to a wall for nine years leading to his discovery of enlightenment and establishment of Buddhism.