• Delivered to you in Ashburn by Feb 9th.
• Standard shipping is just $3.80 for any order.
• Hand-Painted Calligraphy - Each one is unique.
• Handmade Wall Scroll.
• Money-Back Guarantee. 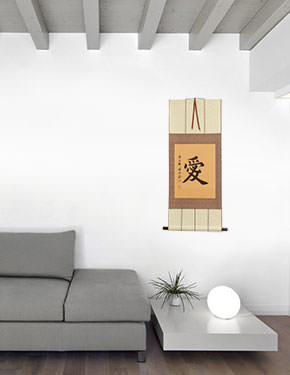 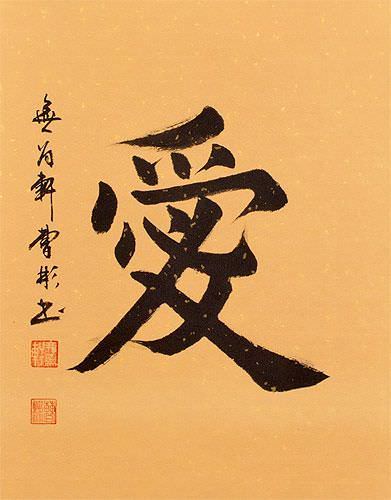 This is the Chinese/Japanese/Korean character for "Ai" which is "Love".

This may be hard to imagine as a westerner, but the strokes at the top of this love character symbolize the family & marriage.

The symbol in the middle is a little easier to identify. It is "xin" which is the character for "heart" in Chinese and Japanese. I guess you can say that no matter if you are from the East or the West, you must put your heart into your love.

The strokes at the bottom create a modified "you" character which means "friend". (pronounced like "yo" - to call someone "friend" you'd use two characters and it would sound like "pung-yo" using English pronunciation rules).

I suppose you could say that the full meaning of "Ai" is to love your family, spouse, and friends with all of your heart, since all three elements exist in this character.

A simple phrase in Chinese in which this word is used is:

Chinese
I LOVE YOU
Calligraphy Scroll