• Delivered to you in Ashburn by Dec 7th.
• Standard shipping is just $3.80 for any order.
• Sadly, this great artist passed away. This is his last calligrpahy piece like this.
• Hand-Painted Artwork.
• Handmade Wall Scroll.
• Money-Back Guarantee. 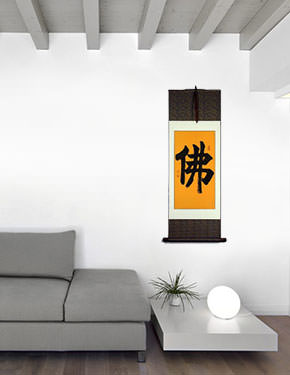 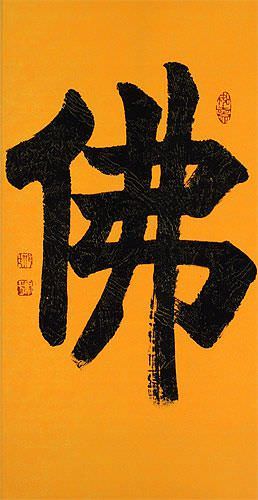 This particular calligraphy is done in a bold Xing-Kaishu (Running-Regular Script) style. It's written on Buddha-Orange xuan paper, with a subtle etched-gold background pattern. This orange color is used almost exclusively for Buddhist-related Japanese and Chinese calligraphy. 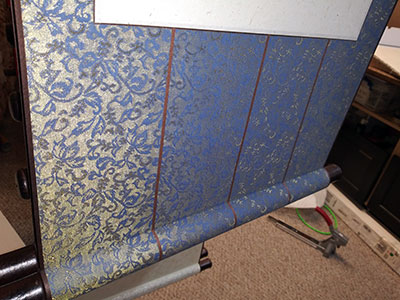 This Crazy Blue-Gold Silk can change color depending on how the light hits it. 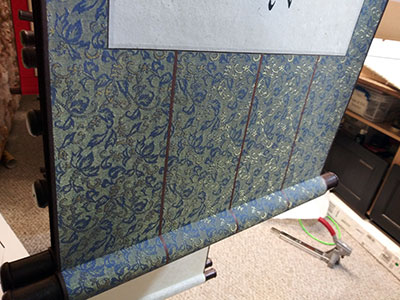 I'm added these images because the photo above does not really capture the true color, pattern, and texture of this brocade.
The images are from a different scroll, but the same crazy blue-gold brocade.

In Mandarin Chinese, this is romanized as "fo". The pronunciation is hard to duplicate in English, but it's somewhat between "foe" and "fo-ah".

While this is considered the standard Chinese character and old Korean Hanja form of Buddha, it's also seen in Japanese - especially in religious context. In Japanese, this is Romanized and pronounced "Hotoke" (Hoe Toe Kay) in Japanese.

Chinese and Japanese Calligraphy is only practiced by those with a keen and agile hand. It is an art that dates back thousands of years. Great artists, writers, and poets of China and Japan are often admired for their calligraphy ability and style.

This piece was done by Master Calligrapher Xing An-Ping of Beijing, China.

Xing An-Ping and I in front of my studio door in California, 2016.
He wrote the calligraphy for the logo on my door.

This was during a trip when Xing An-Ping, his wife, son, daughter-in-law, and grandchild came to visit and vacation with us in the USA.

Saying goodbye to a special friend...

As we came out of the Chinese New Years holiday in February 2017, I got a message from Master Calligrapher Xing An-Ping that he had been admitted to the hospital with a probable case of pneumonia.

A couple weeks later, he informed me that the diagnosis was leukemia. All of us were quite shocked. However, Xing An-Ping indicated that he fully planned to write calligraphy between his weeks of chemotherapy.

I knew the future might be bleak, but I expected that difficult future was a few years away.

On April 8th, 2017, I received a message from his wife. Xing An-Ping passed from this life and started his journey to the next. His death is a huge shock.

I am proud and honored to have been able to call myself his friend for the past 12 years. We were so close that my family and his vacationed together just last year in California.

I learned so much from him, and he provided my customers such great calligraphy all these years. He would occasionally mention how very satisfied he was to know that his artwork now hangs in the homes of people in roughly 65 countries around the world. And now that calligraphy is his legacy that lives on.

This loss is so great that I am having trouble even articulating just what this means to myself, my wife, and my small staff at Oriental Outpost. The artists that I work with in this business have always felt like family to me, perhaps now more than ever.

Some random facts about Master Xing:

Master Xing is not only an expert in nine different Chinese scripts, but also can write any of more than 40,000 characters in the Chinese and Japanese lexicons, including alternate forms, without reference to any books. This is very rare, as most calligraphers must consult special reference books to find rare and alternate forms of many characters. Most literate Chinese people of this generation can only read 5000 characters, and perhaps write 3000 of them without reference.

His belief is that art is more important than politics. Therefore, he is more than willing to write Japanese words and phrases. This is rare for a Chinese calligrapher, as most still hold strong distaste for Japan due to the atrocities in Nanking (Nanjing) before and during WWII.

He believes that all religions should be respected. While he sees himself as a Buddhist, and meditates before writing all of this calligraphy, he carefully creates Christian, Jewish, Muslim, and other religious calligraphy artwork upon request of customers in China and around the world.

Unlike many or most Chinese men, Master Xing does not smoke or drink. He eats mostly vegetables and not too much meat (Yes, contrary to popular belief, many Buddhists do eat meat - in moderation). His healthy lifestyle is probably why he is in his late-50's, but looks like he is 40.

He speaks in sophisticated Chinese - they way you expect a doctor or professor to speak. My Chinese is at about the level of a 3rd-grader, so he has to "dumb down" his Chinese when he and I have a conversation.

Master Calligrapher Xing An-Ping filmed for the 2008 Olympics by NBC.

Master Calligrapher Xing An-Ping and I
visit at his studio in the
Haidian District of Beijing.

A summary of when we met and shared philosophies...

When I met Master Xing, in early 2005, I had already looked through the studios of almost 100 top-rated calligraphers, in search of the one I wanted to work with (a process that took two years). I liked the quality and styles I saw in his studio, and we sat down to talk. I told him of my plan to bring very personal and customized Chinese calligraphy to the masses. We talked about catalogs of high-level calligraphy that sells for $2000-$5000 for a single wall scroll. This is fine for a collector of Asian calligraphy, but it puts it out of reach of the common people. I told him that my plan was to offer a beautiful product at an affordable price, while at the same time, educating people about calligraphy and Chinese culture.
He agreed to lower his price in favor of these ideas:
1. His artwork being displayed in over 60 countries around the world.
2. His part in providing education and knowledge about this special art.
3. The fact that I was going to potentially keep him busy with lots of interesting projects.

The final philosophy is, "The legacy of this artwork far outweighs the money received for creating it".

I also found a kindred spirit with Master Xing in the fact that he cares as much about quality as I do. I've always been picky about quality, and thus spent years searching for the best scroll maker in all of China. When I found him, I helped him set up the best mounting workshop ever. We even imported special saws from Sweden, had huge custom glass-top tables made, and recently bought the largest and best artwork press that they make.
Before Master Xing would work with me, he sent me away with a piece of his raw calligraphy to have mounted as a scroll at our workshop. Master Xing had his own favorite mounter, and knowing the quality issues (or lack there of), he wanted to make sure his artwork was going to be mounted using the best materials and craftsmanship. When I brought the scroll back a few days later, he said, "Wow, this is better than mine". He now gets his own artwork for domestic sale at his studio, mounted at our workshop.

In the past few years, I have become very serious
in my appreciation of Asian calligraphy.
Just watching the way a good calligrapher gracefully
moves and pauses his brush can be mesmerizing.