• Delivered to you in Ashburn by Dec 5th.
• Standard shipping is just $3.80 for any order.
• Hand-Painted Artwork.
• Handmade Wall Scroll.
• Money-Back Guarantee. 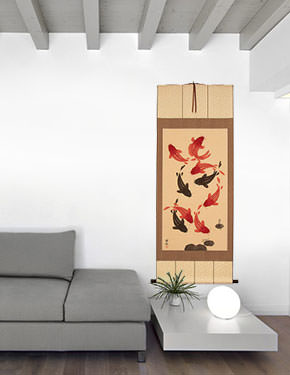 This koi fish artwork will look great in your home or office.

If you love koi fish, this scroll is just what you need on your wall... 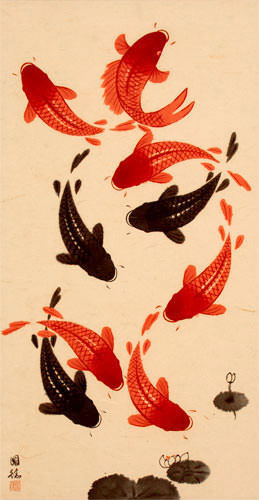 Please note that the paper used in this artwork is handmade. You will see a lot of fibers or husks embedded in the paper in various places. To me, this serves as proof of the handmade nature of this paper and something that adds to the classic and traditional look of this wall scroll. This is my favorite paper for my own artwork!

These fish are associated strongly with both Japanese and Chinese cultures. Beautiful garden parks in the cities around China are often graced with a pond full of these fish throughout the year. They are very strong fish as they can be seen swimming slowly under thick sheets of ice in lakes during the brutal Winter of northern China.

Also, in Mandarin Chinese, "fish" is pronounced "Yu" which is the same pronunciation as the word meaning "wealth" or "being rich". So many Chinese people believe that having a painting of fish in your home will bring you wealth and riches.