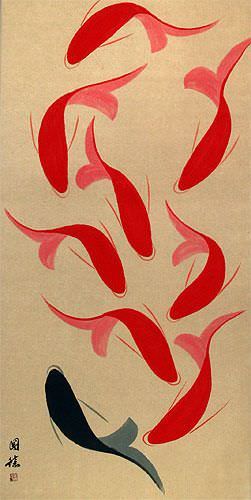 This wall scroll features 9 abstract koi fish swimming in every direction. The paper used is a mocha color tea-stained paper. This is very special handmade paper that gives a classic look.

These fish are associated strongly with both Japanese and Chinese cultures. Beautiful garden parks in the cities around China are often graced with a pond full of these fish throughout the year. They are a very strong fish as they can be seen swimming slowly under thick sheets of ice in lakes during the brutal Winter of northern China.

Also, in Mandarin Chinese, "fish" is pronounced "Yu" which is the same pronunciation as the word meaning "wealth" or "abundance" some will even say that it means, "being rich". So many Chinese people believe that having a painting of fish in your home will bring you wealth and riches.

Koi Fish Having Fun in the Lotus Flowers
Oriental Painting