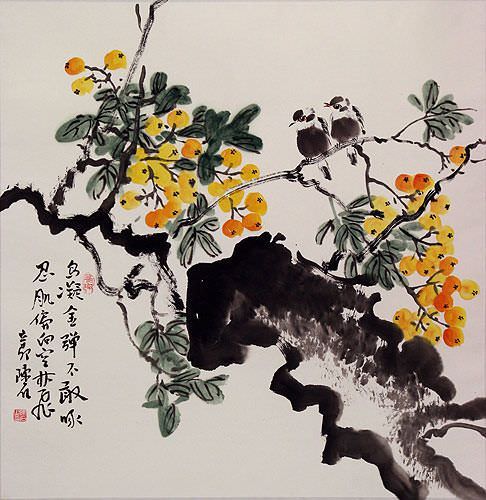 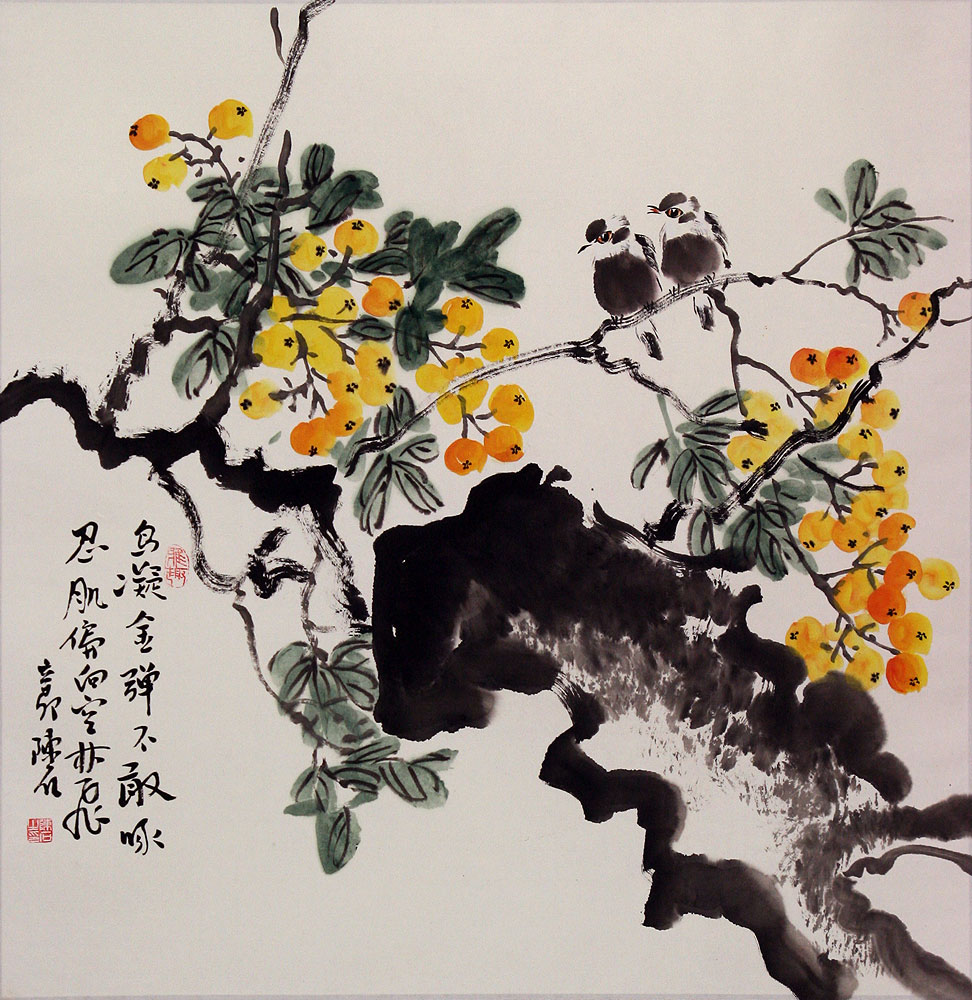 • Delivered to you in Ashburn by Feb 9th.
• Standard shipping is just $3.80 for any order.
• Unique Hand-Painted Art - Limited Supply.
• Money-Back Guarantee.

Nothing Ventured Nothing Gained

This painting features two birds alight on the branch of a loquot tree.

The title is 鳥凝金彈不敢啄，忍飢偏向空枝飛 which is an odd poem that roughly translates as "The bird that does not dare to peck the gold bullet, will endure hunger and flies instead to the empty branch". I guess this is a "nothing ventured, nothing gained" idea. Take a risk, and maybe you get something, no risk, no chance to win.

The whole 金彈 (golden bullet) part could be translated other ways, as 彈 also can mean pluck (a string), to play (a string instrument), to strum, to spring or leap, or to shoot (e.g. with a catapult). It's definitely about taking a risk to potentially reap a reward.

The inscription and signature read, "辛卯年 秋月 碩生" which translates roughly as, "8th-Heavenly-Stem [of the] 4th-Earthly-Branch Year (An indication this was painted in 2011), [under an] Autumn moon, Shou Sheng".

If you are not completely delighted, I will refund everything, including shipping costs, and even pay your postage to return this artwork to me. It's that good.

About the Artist Kang Shuo Sheng

The artist's name is 康碩生 (Kang Shuo-Sheng). Sometime in the Spring of 2012, I met him in Jinan city which is the capital of Shandong Province in northern China. I loved the detail of his work and picked up a few of his pieces. I often keep good ones like this around for my personal decorating, when I am called to decorate a fancy Chinese restaurant. I've had some of these sealed away in a flat file drawer for more than a few years. I guess it's time, like fine wine, to release these to the public.

Kang Shuo-Sheng was born in 1952 in Shandong province. From a young age, he had great interest in traditional Chinese painting style. His formal art studies began in 1978 at the Shandong Art Institute. His specialty quickly became bird and flower paintings.

Soon after, he opened his own studio and has quite a following in Shandong, and the rest of northern China. After a fellowship at the Tianjin Art Institute in 2001, he developed an interest in emulating the art styles seen during the Yuan, Ming, and early Qing dynasties.