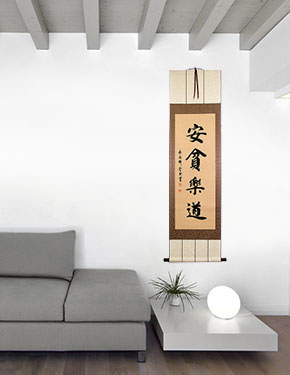 It's Better to be Happy than Rich

"Even if you are poor, you should still feel satisfied in your life...

... Satisfaction, happiness, and the meaning of your life comes from within yourself and not from money or riches of the world".

In Chinese, there are a lot of four-character idiomatic phrases which express some very old philosophies.

Though there are only four characters on this scroll, in Chinese the meanings often surpass the dictionary definition of each character.

If you would like to customize and purchase a wall scroll with this calligraphy phrase, please see our Better to be Happy than Rich - Custom Chinese Calligraphy page.