• Delivered to you in Ashburn by Dec 2nd.
• Standard shipping is just $3.80 for any order.
• Hand-Painted Calligraphy - Each one is unique.
• Money-Back Guarantee. 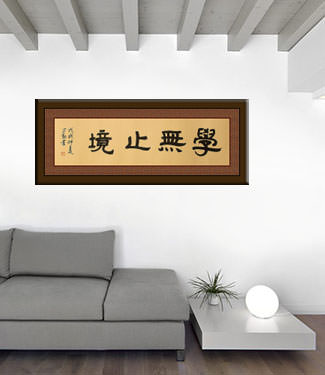 This calligraphy tells of how we continue to learn throughout our lives. It can be translated in a few ways such as, "Study Has No End", or "Knowledge is Infinite"

The deeper meaning: Even when we finish school we are still students of the world gaining more knowledge from our surroundings with each passing day.

The inscription, 戊戌仲夏學勤書, includes the artist's signature and an indication that this was painted in mid-summer of 2018.

This calligraphy was hand-painted with special Chinese ink on rice paper and then mounted with a copper-colored silk brocade border. This makes it ready for custom framing upon arrival. Take it to your local professional framer, or the Aaron Bros framing center in your nearest Michaels Store (get a coupon first!).

Chinese calligraphy is only practiced by those with a keen and agile hand. It is an art that dates back thousands of years, and great artists, writers, and poets are often admired for their calligraphy ability and style.

About the calligraphy style...

This style of calligraphy is a flowing caoshu. The word cao means "grass" and shu means "script" or "writing". In English, this is often translated as "cursive". In this style, each character flows into the next. Instead of distinct strokes as seen with more conventional characters, you'll see just one almost-continuous stroke. Because of the special cursive nature, many Chinese people probably can't read this poem without some hints or help.

(Xu Xue-Qin) of Jia Shan, which is in Zhenjiang Province of Southern China. He currently works as a school teacher in Jia Shan. Along with teaching, writing calligraphy is his passion.

Xu Xue-Qin is far beyond a hobbyist calligrapher. His calligraphy has been awarded and certified for its quality (see certificate below from a nation-wide calligraphy competition, May 2010). His calligraphy was also chosen for the cover of a widely-read magazine, The World of Weiqi. His calligraphy is also featured in calligraphy textbooks. On weekends and evenings, he can be found teaching calligraphy at a local art school.

Note: I do have a bit of guanxi with this calligrapher which allows me to offer his work to you at a very special price. He happens to be my wife's uncle.

Xu Xue-Qin's work featured on the front cover
of The World of Weiqi magazine.

About the calligraphy artwork...

The calligraphy artwork was painted on Chinese xuan paper (known incorrectly as "rice paper" in the west). This is a high-quality handmade paper which is based on mostly mulberry or blue sandalwood (tara wing-celtis) tree pulp.